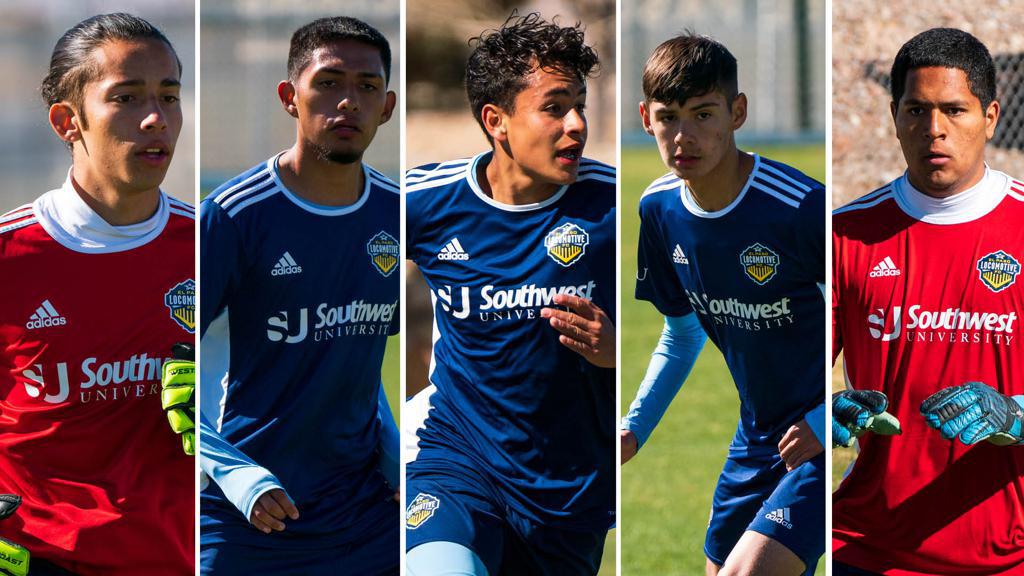 In early June 2020, El Paso Locomotive FC introduced its Youth Soccer Club, boasting teams ranging from Under-13s to Under-18s. Each team features the best and brightest of kids across the Borderland, shining a spotlight on what the future has to offer from El Paso. From the start of the Locomotive 2021 preseason at the beginning of March, the talent that has been building in the Locomotive Youth Soccer Club has been showcased on the training ground and the preseason friendlies against New Mexico United and FC Juarez.

Training and playing alongside a professional team is an experience and opportunity that many young soccer players have never had until now. Experiencing the professional level drills culminating in minutes played against a high-caliber team, provides the youth of El Paso a unique opportunity to advance their skills on the pitch. It's a symbiotic relationship between the first team and the youth club that is showing off the hotbed of soccer that lives in El Paso.

“Finally, in El Paso, we have this pathway between the Youth club and the professional team,” shared Director of Locomotive Youth Soccer Bob Bigney. “For promising players to get this experience in the past they had to leave town and go to other teams. Now they can get this experience whether that’s just to be around the pro team and watch them train, be invited to jump into the training or to work their way onto the team, that opportunity is there for them right here in their hometown.” 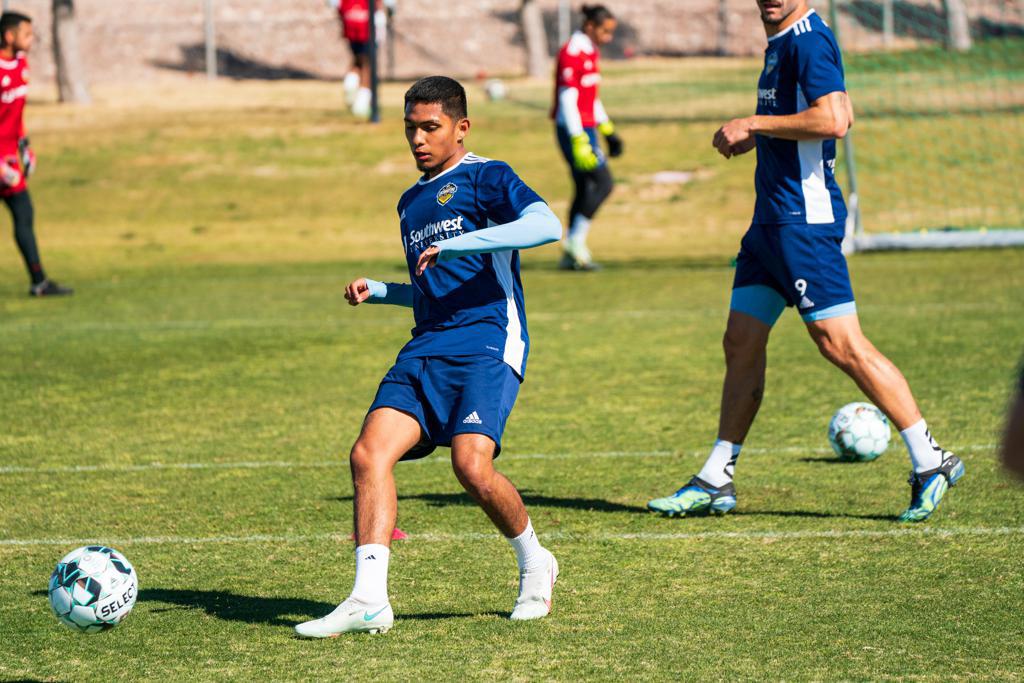 For just over three weeks, three talented young players have joined Locomotive in their training sessions with each young player making an appearance in the 2-1 victory over New Mexico United and the 1-2 loss against FC Juarez. Edwin Villareal (18), Jaime Villagomez (18), and Joel Maldonado (17) have all made the most of their opportunity in growing their talent on the pitch, and it’s something that Head Coach and Technical Director Mark Lowry has taken notice of.

“They’ve been training with us for three weeks now,” began Lowry. “Every day in preseason they have come in, worked hard, and shown commitment. They’ve grown as players already. We have seen the massive elevation in their game just by being around the first team.”

From the start of preseason, Edwin, Jaime, and Joel, alongside Youth Soccer Goalkeepers Mario Castillo and Kevin Pena, have been studying underneath the pros, learning and improving. They each have relished in the opportunity to get a taste of what it is like to be a professional soccer player, not only improving their skills in their own backyard but fueling their dreams further to play at the professional level. Bigney and Lowry have both noted they have seen how excited and thrilled the kids are to have this opportunity and as Bigney notes, the pros are welcoming to the experience as well.

“Credit goes to a lot of the guys on the first team who help make these kids feel comfortable,” began Bigney. “Guys like Yuma and Richie, who have been at clubs that traditionally bring up youth players, are really welcoming of the kids and that makes them feel comfortable. When they feel comfortable, they play better, feel like they are part of the team and it helps with the overall experience.

It helps with the training and better training makes for a better team. It keeps them sharp but also these young guys are pretty quickly saying ‘I want to take your spot and I’m going to work hard to try and take your spot’ and that’s the kind of competition that you need.”

Though these young players have the mentality and spirit to try and turn heads, they still recognize they have a long way to go. 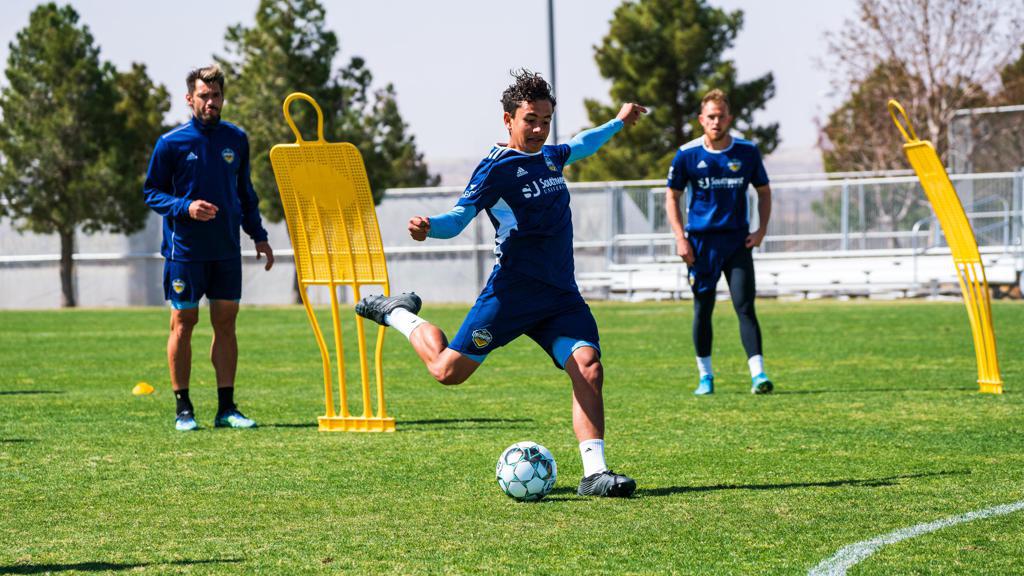 “It’s been a pleasure to get this opportunity from the Locomotive coaching staff and Bob for giving me a chance to practice in the first place,” said Joel Maldonado. “It’s different from anywhere else I’ve gone. I still have a lot to learn but honestly, I look forward to coming in here every day to learn and train with the first team.”

Joel knows there is a great young soccer community in El Paso and that the Locomotive Youth Soccer club offers a good opportunity with chances to learn in the first team, to be around difficult environments, and pave a new way for the El Paso youth soccer community into the professional levels. It starts young with good levels and unique opportunities to play with and against professional teams such as FC Juarez.

“Having the chance to play in these preseason games aren’t token gestures of two or three minutes in a game,” said Mark Lowry. “They have had to go out there and compete in difficult environments – in New Mexico it was fans around the field and windy conditions. We are just trying to win a game and play well. All three of the youth kids went in and did fantastic. It just means that El Paso, the community, and the Youth Soccer in El Paso has a bright future.”

“The hard work feels like it’s paying off,” concluded Joel. “Just like Mark says, you have to keep working hard, be the best at the top and keep chasing the dream. In the beginning, I was nervous, but as soon I touch the ball, I know I have to show what I’ve learned here with Locomotive. It has been an honor to play in both games.”

Leading up to El Paso Locomotive’s third campaign in the USL Championship, the Locomotive Youth Soccer Club will continue to be invited to trainings, preseason friendlies, and to help elevate the team. Bob Bigney, Mark Lowry, the first team, and the Youth Soccer Club are putting in work to build and raise the level of soccer across the Borderland, truly putting meaning behind “El Paso has a bright future.”