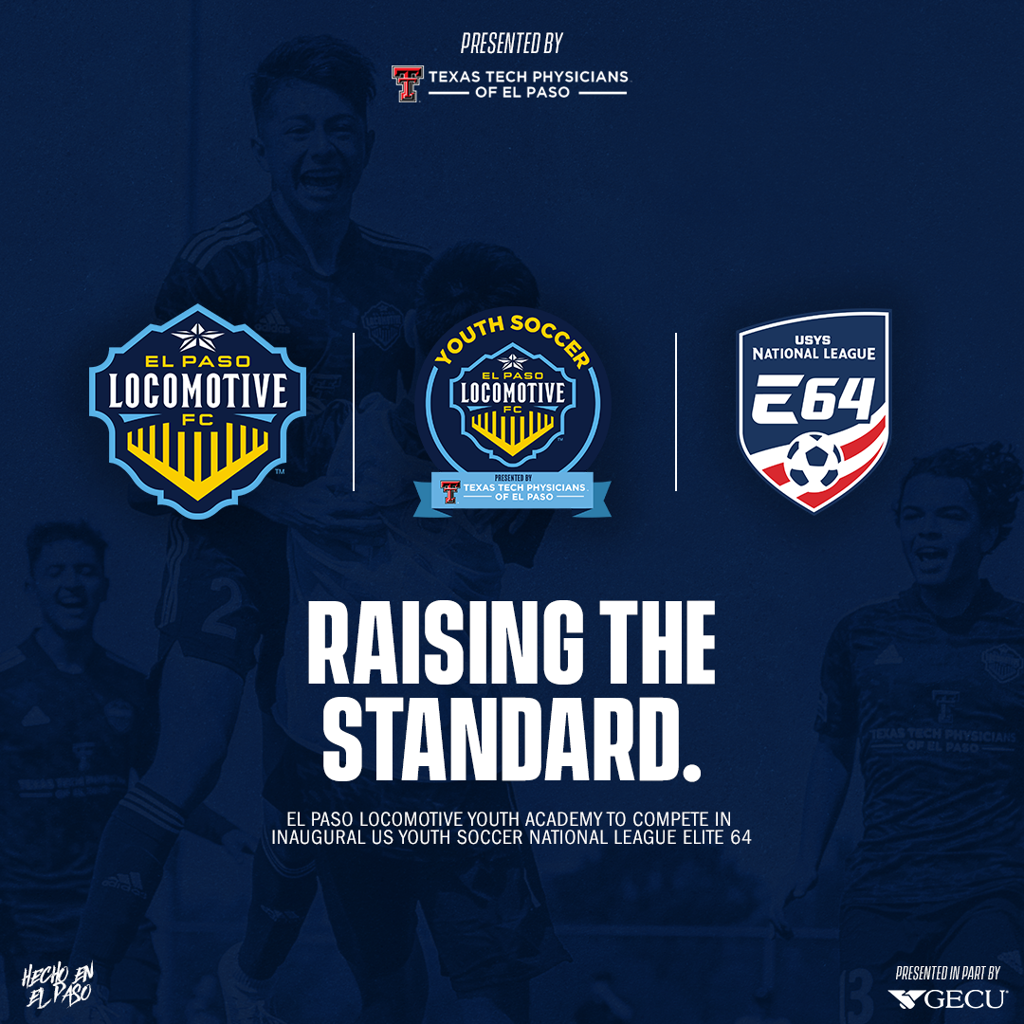 El Paso Locomotive FC and the US Youth Soccer National League is excited to announce the Locomotive Youth Academy will compete as one of 64 high-caliber boys clubs to compete in the inaugural National League Elite 64 launching this Fall. The Elite 64 features year-round competition in six age groups ranging from U-13 to U-18/19 for the top 64 boys clubs and top 64 girls clubs in the country.

“We are thrilled to welcome El Paso Locomotive FC as an inaugural boys club in USYS National League Elite 64,” said National League Commissioner Simon Collins. “The El Paso area has a very deep pool of talented young soccer players that can often be overlooked, and we’re excited for the players to have the opportunity to compete in an elite national platform. As a USL Championship club, El Paso Locomotive FC brings a unique element to Elite 64, and we believe Elite 64’s competitive level and data-driven analytics will help to strengthen the pathway to professional soccer — or the college game — for the young athletes within the club.”

The Elite 64 will consist of an annual competition calendar that includes a minimum of 14 league games over a 10-month season. The top regular season finishers will compete in championship brackets with the winners in select age groups advancing to the USYS Champions Cup where Elite 64 Finals winners in the U-14 to U-17 age groups can compete for an international title against other domestic and international champions. Additional to the Elite 64 league and cup competition, the Locomotive Youth Academy will also feature in two national showcases against top talent from all levels.

Since its founding in 2020, El Paso Locomotive Youth Soccer title partnership with Texas Tech Physicians of El Paso presented in part by GECU has excelled its mission to provide the El Paso community a platform for success through competitive soccer. By providing El Paso youth soccer hopefuls a supportive and competitive environment, the Locomotive Youth Academy paves the way for its players to reach success in either professional or collegiate levels. The Elite 64 offers players in the El Paso Locomotive Youth Academy another opportunity to compete against the best the nation has to offer.

“The progression of our Academy Program has been fast and fruitful in the last two years,” Locomotive General Manager, Business Operations Andrew Forrest said. “From a fledgling program to one that boasts 10 Academy Contracts with the First Team, a semifinal appearance at Dallas Cup, an Allianza national championship, four Copa Rayados championships, and an Academy player starting in a USL regular season game to two other Academy players coming off the bench; needless to say, the Academy Program has proved efficient and nationally competitive in a short period of time.

We see Elite 64 as the next natural progression for our Club and our city.  We look forward to competing against some of the best clubs in the country to showcase the hard work being done in El Paso and Elite 64 gives us that chance to connect with other like-minded clubs.  We cannot wait to get started!”

El Paso Locomotive Youth Academy teams will be hosting open tryouts ahead of entering the USYS National League Elite 64 beginning Monday, May 23 for players ranging from U13 to U18. Additionally, the Locomotive Youth Soccer Club teams will be hosting open tryouts ranging from U11 to U18. All players interested in attending tryouts much register by Sunday, May 22nd at 5:00 p.m. MT. To register for the open tryouts, or for more information, visit eplocomotiveyouthsoccer.com/tryouts.