El Paso Locomotive FC Academy kicked off their inaugural entry in the National League Elite 64 this past Saturday, August 27. Six Locomotive Youth Academy teams are participating in the year-round competition across six age groups ranging from U-13 to U-18/19 for the top 64 boys clubs in the country. This weekend featured 12 matches for the 6 Locomotive Academy teams as they began their season with an explosive debut and drive to keep the momentum moving in league play. 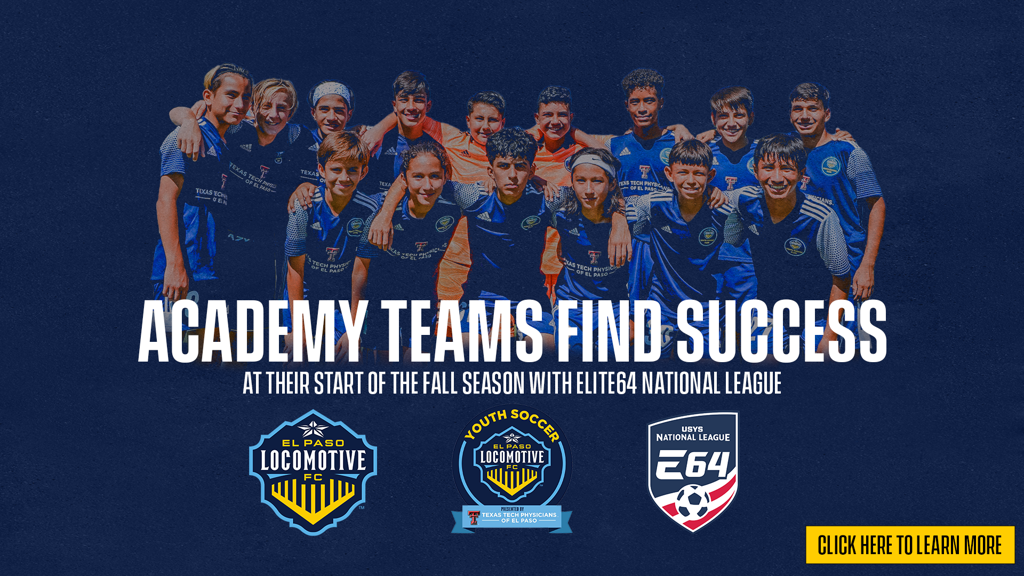 El Paso would go on to amass an impressive 11-1 record over the two days of play across the six Academy teams represented.  Director, Youth Soccer and Programs Colin Herlinger commented, “It was really exciting seeing all of the parents and players back on the field again after a much-deserved summer break. The atmosphere that was created because of the quality of competition and having many of our players stay after their games to watch our other teams compete was exhilarating.”

The talent on display for Locomotive this weekend can be summed up in one word—Impressive. “Many of the games were competitive and a few were decided in the final minutes of the game. This included the 08 Academy team who on Sunday won 4-3 with a last second toe poke finish to win the game.” Herlinger continued, “On top of that, the team they faced was listed as number 1 in South Texas and the 72 ranked team in the nation. I am looking forward to the many more successful weekends of E64.”

The Elite 64 will consist of an annual competition calendar that includes a minimum of 14 league games over a 10-month season. The top regular season finishers will compete in championship brackets with the winners in select age groups advancing to the USYS Champions Cup where Elite 64 Finals winners in the U-14 to U-17 age groups can compete for an international title against other domestic and international champions.

“We’re very excited to be part of the National Elite 64 competition. It ensures that our athletes can continue to play at one of the highest levels of youth soccer in the US. The resources, leadership, and pathway of the platform will allow our club to not only compete against some of the best players and clubs in the country, but it also provides a tremendous opportunity for development and exposure for our players who want to compete at the highest levels,” commented Locomotive Academy Director Ivan Militar.

Militar continued, “"It was a tremendous weekend for us because our Academy was able to begin its journey on the new path we have created for our young players. For us, the Elite 64 National league competition is an opportunity to challenge our organization on and off the field as well. Hosting Tigres was a privilege for us, and we are very proud on how the first hosting event went as part of the E64."

Since its founding in 2020, El Paso Locomotive Youth Soccer’s title partnership with Texas Tech Physicians of El Paso presented in part by GECU has excelled its mission to provide the El Paso community a platform for success through competitive soccer. By providing El Paso youth soccer hopefuls a supportive and competitive environment, the Locomotive Youth Academy paves the way for its players to reach success in either professional and/or collegiate levels.