El Paso Locomotive FC announced a historic first for the club today with the signing of two Academy players to full professional contracts. El Pasoans Diego Abarca and Joel Maldonado will be suiting up for the 2023 season as the first homegrown academy products to ink professional contracts since the formation of the Academy in 2020. Both midfielders featured in the 2022 season with the first team as USL Academy players. 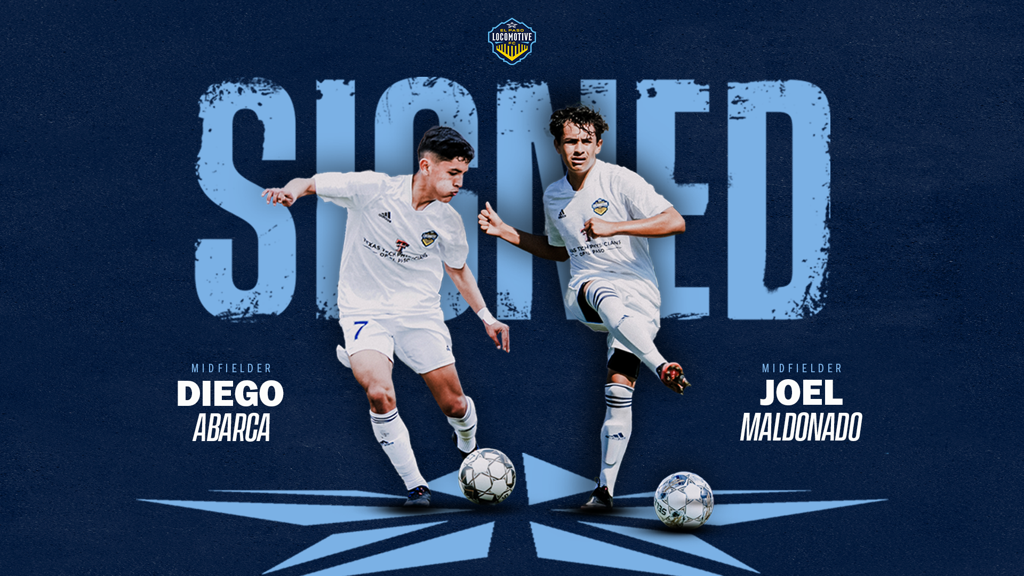 “Ownership, Alan, and Andrew have shown great initiative with the Academy and the ability to offer young players professional contracts. With that, Joel and Diego are the first but definitely not the last to be promoted from within our own club. We are fortunate enough to have the right people with the Academy, and we have the ability to help young players grow and choose the pathway they desire,” commented Head Coach and Technical Director, John Hutchinson.

Abarca appeared in eight matches for El Paso this season and scored his first goal for the Locos in June. As Locomotive and Hartford were both locked at 0-0, Abarca scored a stunner in the 56th minute to give El Paso the opener. The 16-year-old received the ball near the top of the 18-yard box and sent it screaming into the far post’s upper corner. His masterclass performance earned him his first goal and an ESPN Top 10 play.

“Diego has shown talent since my arrival at this club. He was with us in preseason and played some good minutes throughout the year. He is a young player with potential and we want to see what he does in the future,” stated Hutchinson.

Maldonado appeared in six matches for El Paso this season and was a part of the 18-man roster for a large percentage of the 2022 campaign. Hutchinson commented, “Joel started with us also through preseason. He has grown throughout the year earning good minutes with the first team. We are looking at Joel earning more minutes next season and helping the team be successful.”

The Locomotive Academy has made strides in its first two seasons, earlier this year, graduating 10 of their local homegrown players and sending them to play collegiate soccer. El Paso Locomotive and the Locomotive Academy is dedicated to elevating and fostering the talent that exists in the borderland and creating opportunities for these young athletes in the professional and collegiate space.

“This is a great day for our entire club, but more specifically, this is an exceptional day for our Academy. These contracts have been awarded on the basis that both players have high potential, earning their professional deals after showcasing their talent in our fully funded U19 USL Academy League Team. Our Academy is extremely proud of Joel and Diego; we have real belief in their ability,” commented Academy Director Ivan Militar.

Since its founding in 2020, El Paso Locomotive Youth Soccer’s title partnership with Texas Tech Physicians of El Paso, presented in part by GECU, has excelled in its mission to provide the El Paso community a platform for success through competitive soccer. By providing El Paso youth soccer hopefuls a supportive and competitive environment, the Locomotive Youth Academy paves the way for its players to reach success in either professional and/or collegiate levels.

Militar continued, saying, “at El Paso Locomotive FC’s Academy, every young player feels as if they’ve got a chance here. They’re all going into every training session thinking, ‘this could be the session that changes my life,’ and that’s the right mindset to have. The leadership of the club and Coach Hutchinson have given everyone motivation, with the trust they show in young players. In El Paso, it’s a realistic target to make the first team, and that’s the incentive for our young players to get their heads down and work hard each and every day. It is also important to mention that Joel and Diego would not be where they are now without the strong soccer foundation in the El Paso area. Joel has spent developmentally important years with Athletic Club, while Diego comes from the Eastside club, La U USA​.”